I have to say that the subject concerning NSA and Mr. Snowden has made an impact on millions of citizens around the world.  We all accept that we of course live in a global world were information increasingly expands across borders, countries, continents, different legal systems and different local and federal agencies.

Fighting crime is important, criminal activity in any form should be fought independent on if it related to terrorists, economical crimes, child abuse or any other form of coordinated crimes. But how do we define the rules of what tools should be available to the government or the responsible agencies to fight back?

The United States of America believes that  there is no need for rules as long as they are one of the few superpowers remaining on this planet, in fact they do not even believe that innocent American citizens should be taken into consideration in the fight of crime.

Has the world really suddenly been such a horrible place that we are prepared to give up all our rights, all our knowledge about the rights for privacy? We have been here before, but in a world not so much Digital as it is today. During World War 1 and World War 2 there where countries (Democratic or not) that spied on most of their citizens. The intelligence community where “blooming”.

But that was war, and not everyone where monitored when then went to the movies, went out and bought some fresh milk.
What one needs to ask himself : Are we at war? And who is the enemy?

The United States of America has made it clear that they are at War, at least the former administration where clear on that, it was their only way to legitimize  their actions and the only way they could delude the American people. “Afghanistan is our enemy, we are at war”.

That gave the US intelligence community a chance to take back some of the power they had during all the previous wars, to once again start spying at a large scale. But now the world is all digital so you will not recruit James Bond but instead buy large amount of computers and employee all the geeks you can think of. But that costs money and as always budgets are fixed and headcounts written in stone. That might be where Edward Snowden came in, as a contractor and I’m sure he was not the only one. The new digital “spy:net” where forming.

But in 2008 there where a problem, the Fisa Amendments Act of 2008 only allowed the “spying” to take place on non US citizens outside of the United States of America. Remember that the US policy where that they were at war with Afghanistan and not with Texas or North Dakota or any other US state, so there where no reason to spy domestic.

Apparently the policy has changed,  they might have woken up and realized that criminal activity could nowadays come from anywhere  something we have learned here in the Nordics when Norway in 2011 where attacked by terrorist in Oslo and Utøya. At least that what the US would have said, but we all now that a single person where responsible for the loss of 69 Norwegians.  FBI also have some knowledge about this as several massacres has been carried out in the US and very few has been a coordinated criminal attempt.

But FBI has never issued any mass surveillance of 300 million US citizens to try to prevent a new school massacre. But this is about to change according to the guardian as new stunning evidence from Edward Snowden shows that every citizen in the world is monitored by the United States of America.

The world is crowded with servers from NSA monitoring traffic from US citizens and everyone else in the world. The tool very much shows that NSA has a pipeline to popular services like Facebook (That has previously been denied) and emails to query content. In fact the amount of that that is collected is huge that they can only store it 24 hours or a few days in “raw format” before it needs to be processed.

The term “Big Brother” gets a new meaning. 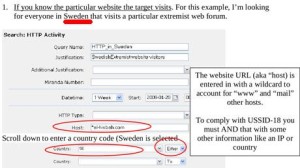 In the example above we can see that NSA is using Sweden as an example of a Query.

Before the collection of raw data of innocent citizens where not possible, in fact the warrant for phone tapping where so controversial because innocent conversations could be recorded (Lets say a telemarketing company calls) but know you don’t have to be suspected at all as all your conversations will be recorded, someone writing a email to a journalist about miss conduction on a federal agency will be monitored and actions could be taken or let’s say the president get’s a campaign email on his (famous) BlackBerry that NSA wants to “keep”, the could do so.

We who work with Internet or Media knows that “content is king” and the more content you have the safer you are. The United States of America seems to think in the same terms – the more information we have about the world and our own citizens the safer we would be.

They just missed to check the constriction and to inform the American people.