The end to Internal Communications and collaboration?
Configure IIS ARR as a reverse-proxy replacement for TMG

We have all been waiting…

For voice to go mobile

It all depends on who you ask but according to me this has been the number one missing piece of the puzzle when it comes to Lync reach.

The Enterprise collaboration landscape is changing
everyone working with enterprise video, voice notices that the landscape is changing, companies like Cisco, LifeSize, Polycom and Microsoft among others are under pressure to make video conferencing and collaboration more efficient and better suited for employees, partners, customers on the run. In the old school a conference call where all about voice – you call someone, or rather call a voice conferencing bridge like BT MeetMe. A lot of companies still relies on these services as they have not had the time, energy, knowledge or capital to invest in expensive video room solutions with expensive hardware and software.

This is about to change thanks to Microsoft. The first step in their master plan to conquer the world of collaboration would be to extend their reach to allow users to join meetings whenever they are. Lync clients with video, voice and conferencing capabilities have just launched. Windows Phone 8 was first up (no surprise) but really close followed by the iPhone and iPad versions. 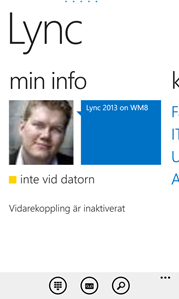 I’m testing Lync from my home lab (homelab) where I have configured Enterprise voice and federate with a few friends & colleagues. I’m really surprised how good the quality where. I did tests from both 3G and Wi-Fi both networks have great capacity and low latency. (The Wi-Fi is around 110Mbit/s and 3G is around 15Mbit/s). I have not yet done any field testing on congested 3G networks in the city, handover between cell towers etc.

So far things works as expected and delivers a great experience. But how would you compare the functionality of a smartphone to the big brother tablet or pc? Personally I think the participation in video meetings on a small screen would not be the best option, here a tablet like the Microsoft Surface or an iPad would be more ideal. However as a device to participate in face to face meetings, outbound and inbound phone calls this really works well. 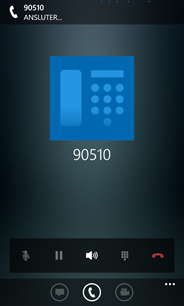 Some of the features obviously requires enterprise voice in your organization to fully work, like inbound and outbound PSTN phone calls. The difference to Skype would be that your calls would be charged on your hopefully attractive rates from your phone company and not Skype’s standard pricing (Skype calls itself might not be expensive but the service is not free if you want to lease a public phone number and attach it to your account). 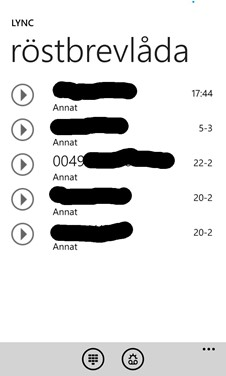 As Exchange is integrated into the app showing your next meetings and your visual voicemails if you have activated the Exchange UM role – having all my voicemails in one single app Is really helpful – I could even go as far as wanting to forward my cell number to Exchange UM to have one unified voice mailbox where I can decide what messages is important to listen to and not.

Technical difficulties?
As with every new toy from Microsoft there are questions about what ports to open? How will this work with my reverse-proxy? Do I need to update all Lync farm members? What new dns entries do I have to create and remove?

This time there are a few new things under the hood. First would be that this app only runs on Lync Server 2013. So if you want to upgrade your mobile app just to take advantage of the Exchange UM for example but keep your Lync 2010 servers this would be a no-no. Also you need the latest CU update (11) applied to all your servers.

If you have never taken an edge server online this might be a good time as the mobile versions allows audio and video (meaning sip traffic) and that needs to flow on the edge server to make all the magic happened.

You also might to investigate your reverse proxy implementation as the way mobile is added in Lync 2013 is different from both how the old mobile extension worked in Lync 2010. As of now the only Microsoft supported reverse proxy would be IIS AAR and I will be writing a tutorial on how to do that. My installation in my home lab relies on AAR as a replacement for my Squid proxy I used before (That works alright but does not work for the new WebTicket in Lync 2013)

Apart from that the setup is very like the Windows 8 “metro” (Yes we are not allowed to call them metro apps anymore but I do not care) application. You need to make sure you have a lyncdiscover.foo.bar entry in your external dns as Lync 2013 mobile do not take advantage of the SRV records (Actually they could but the Lync “metro” app cannot use SRV lookups I’m told so I guess Microsoft decided for some kind of consistency )

Roundup
Microsoft’s mobile apps are great tools for users on the go that do not want to miss a face to face meeting or a call on their office number. The functionality are aligned with Skype but do not require any end-user action to get the service working. For meetings with a large amount of content or participants the tablet versions would be more ideal.